Nothing bonds to PE – however resinnovation GmbH has developed a solution with its Harz8, which ensures the connection of close fit pipes, as well as PE short section or long section pipes to manholes. The ability of Harz8, to seal annular gaps with PE, is now officially confirmed: end of August DIBt approval was extended to include the connection of PE liners into the application range of Harz8.
Harz8 has already been DIBt approved since 2013 for the connection of CIP liners to manholes. The bright red Epoxy resin has been very popular since the market introduction, and continues its victorious march in the underground infrastructure.
Due to its durable flexibility after curing the Epoxy resin is suitable for components, which are in constant move against each other. The resin is compressible by 50 and has an elasticity of 20 percent, and thus flexibly compensates vibrations and shocks without breaking or detaching from the surface.
Harz8 does not shrink after curing, in the opposite, it extends a bit at pressing water, therefor it is the perfect solution for sealing annular gaps. Being pressed against inner surface of host pipe and outer surface of liner the resin reliably seals the pipe against infiltrations.
Various projects prove the demand for a product for bonding PE. By now municipalities and network owners are able to meet these challenges.
https://www.resinnovation.com/wp-content/uploads/2017/02/news-8.jpg 600 1000 adminresinno /wp-content/uploads/2016/11/logo.png adminresinno2015-09-22 15:27:542020-04-21 10:32:43It’s official! DIBt Approval for Harz8 has been extended [Sólo disponible en inglés] 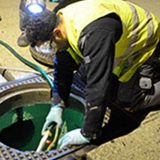